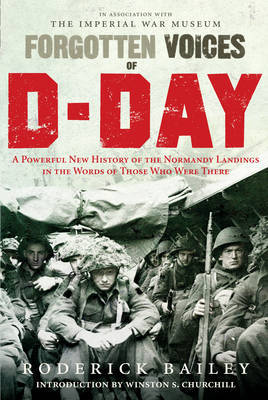 Forgotten Voices of D-Day: A Powerful New History of the Normandy Landings in the Words of Those Who Were There

6 June 1944 is one of the most momentous days in history: the day Allied forces crossed the Channel and began fighting their way into Nazi-occupied Northwest Europe. Preceded by airborne units and covered by air and naval bombardment, the Normandy landings were the most ambitious combined airborne and amphibious assault ever attempted. Their success marked the beginning of the end for Nazi Germany. Drawing on thousands of hours of eyewitness testimony recorded by the Imperial War Museum, Forgotten Voices of D-Day tells the compelling story of this turning point in the Second World War in the words of those who were there. We hear from paratroopers and commandos, glider pilots and landing craft crewmen, airmen and naval personnel. We learn first-hand of what it was like as men waited to go in, as they neared the beaches and drop zones, as they landed and met the enemy. Accounts range from memories of the daring capture of 'Pegasus' bridge by British glider-bourn troops to recollections of brutal fighting as the assault forces stormed the beaches.
Shedding fresh light too on the American contribution, they include the memories of British personnel caught up in the terrible events at Omaha Beach where United States forces suffered over 2,000 casualties. Featuring a mass of previously unpublished material, Forgotten Voices of D-Day is a powerful and important new record of a defining moment in modern history.

Praise for Roderick Bailey's Forgotten Voices of the Secret War "Roderick Bailey has skillfully braided their stories into a coherent narrative, and the quality of their egregious courage catches at the heart."-"Spectator"

Roderick Bailey is a military historian attached to the Imperial War Museum and the author of the Sunday Times Top Ten bestseller, Forgotten Voices of the Secret War, and the critically acclaimed The Wildest Province: SOE in the Land of the Eagle. He is a graduate of Cambridge and Edinburgh Universities and a former Alistair Horne Fellow at St Antony's College, Oxford.