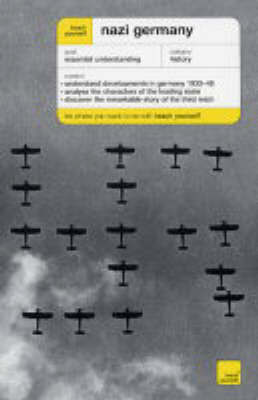 Teach Yourself Nazi Germany is an accessible introduction to one of the most controversial periods in modern history. It looks at the wider picture surrounding it, from the creation of the German nation to Hitler's rise to power and his motives. Before destroying himself and his nation in a bitter world war, the Nazi leader, Adolf Hitler, was adored by the mass of the German people. This book attempts to explain this paradox by involving the reader in the remarkable story of the Third Reich and in the controversies that still surround it. The engaging narrative looks at many different aspects, including the economy and working conditions, the structure of the country (politics, society, culture), Hitler's instruments of terror, treatment of Jews, the role and treatment of women, concentration camps, and, of course, Germany in the Second World War.

"the perfect way to get to grips with the great historical events." -- The History Channel 20040701

Michael Lynch is currently a lecturer in the School of Historical Studies at the University of Leicester. He has extensive teaching experience in secondary, tertiary, adult and higher education, and is an experienced speaker for A Level, B.A, B.Ed, and MA courses and conferences. He is also an A level chief examiner for London Examinations Board and AEB and contributes regularly to newspapers and political and historical discussion programmes on local radio.